Everybody was… kung fu fighting?

This happened. For… funsies, I assume?

I’m not gonna lie, I laughed my ass off. Off, completely. Took me like, ten minutes to find it. I mean… They’re kung fu fighting Scottish monks.

Now, despite that bit of ridiculousness, I actually quite enjoyed this episode. Like in the previous series, we have a bona fide historical figure gracing us with their presence, and this time it’s Queen Victoria:

And I am happy to say that she is as awesome (if not more than) Charles Motherfucking Dickens.

She’s witty and regal and she will shoot your fucking face off, yo:

I also love that this episode features a werewolf.

To quote my surrogate father/sexy librarian crush Rupert Giles, “I must admit, I-I-I am intrigued. Werewolves. It's-it's one of the classics!”

And at the risk of slight blasphemy, I kind of prefer this werewolf to the ones on Buffy. I had the exact same reaction as the Doctor upon seeing it, as a matter of fact.

Speaking of the Doctor… I am now obligated to profess my undying love for all that he is in this episode. Him and Rose, really. They have this new dynamic that’s sorta like the dynamic between Nine/Rose/Jack in the beginning of Boom Town. They’re having fun. They’re giddy, even. Eager for adventure! It’s infectious, really—or it is to me, at least.

This episode isn’t much in the way of heavy stuff. There is some talk of the dead, and how frustrating  it is that their realm is so far beyond the reach of ours (something I know resonated with the Doctor), but for the most part I think this one’s all about the adventure of it.

That is, of course, until Vicky harshes the mellow by scolding the Doctor and Rose (and, by extension, me, since I was having just as much fun as they were) for taking such srs bsns lightly, and exiling them from her kingdom (!).

And then she establishes some kind of organization to investigate (and defend the Empire from) Otherworldly Threats present and future and she calls it Torchwood, but that’s probably not important, right?

We’ve gone forever without a list. Let’s have one, shall we?

After this, we’re going back to school for School Reunion! I don’t wanna give anything away, but that’s one of my faves for many reasons. Until then!

I like those almost as much as sword fights!

Well… when done reasonably well, anyway. As I guess would be the case with most things… Anyway. We have a new episode to talk about! With a new Doctor! On New Earth!

This is one of those episodes that I don’t know how the fandom receives, and I’m glad of it, because it’s one I like for reasons I will outline in this post. Despite The Christmas Invasion, I consider this episode to be the first full-length treatment we get of the new new Doctor, and I love so much that it also brings back the Face of Boe and Cassandra.

… Have I mentioned that I love Cassandra? And what a good episode for her, too!

Okay first? Not fond of the virus zombies. My argument is all science-based, and I know—who am I to bring logic to this discussion, dammit?! I just don’t get how every disease in the universe is communicable by simple touch, or why just a simple mixture of all the medicines would cure it when such a mixture would cause any of a number of reactions that may alter the effect of all the medicines involved, and  not always favorably. And just being showered with it cures everything? I just… Okay, I got it all out of my system, I’m fine.

Still, this happy Doctor fills me with almost as much joy as Chris’ happy Doctor, so I’ll just focus on that.

I like this Doctor. A lot. I like that he’s sort of like a puppy, bouncing all over the place, and I love that he can go to that angry place that makes me feel small. Not as small as Chris’ Doctor used to make me feel, actually, which is fascinating to me.

Nine when he was angry was cold and dark and dangerous. Even when he was shouting, it felt like he was—I don’t know… Calculating just how much you suck as a species? Argh, I hate this language sometimes.

Anyway, Ten is… for lack of a better, more accurate word, warmer… in his anger. He’s dangerous in a different way. It feels less… alien? I don’t know, people.

This isn’t my first language. Sorry about the weird detour.

And now, let’s talk about Cassandra, shall we?

I mentioned before that I love that this episode brings her back (and the Face of Boe, because I just like that thing), and I do so much. Because in many ways, this episode is a parallel of End of the World; we’re being re-introduced to the Doctor, we’re once again in the far future, and we once again have to adjust to changes in the existing world.

So we get two characters that we met in EotW, and we get to see how this Doctor interacts with them.

But Cassandra… Oh, man, Cassandra may be my favorite. At first, she seems not to have changed much at all, trying to use the cat-nuns’ secrets for her own gain, but then with the body-switching and the Doctor’s fine example, she ends up being the co-savior of an entirely new race of human beings. Cassandra does. Cassandra.

And it teaches her compassion. Sadly, it also leads her to realize there’s no place in the new world for her anymore, but I don’t think that’s all that bad.

This Cassandra just knows her time has come. And her last action is to give herself something nice—which is very Cassandra, but also is very poignant, considering everything that’s happened before.

She just wants to know that she’s beautiful. And while Old!Cassandra takes that superficially, Chip!Cassandra means it in a different way.

Of course Cassandra is beautiful—she helps save humanity.

And the Doctor—the Doctor who once stood coldly by as she died—the Doctor gives her the chance.

Argh, you guys… MY FEELS.

Next, Tooth and Claw.

Okay, okay… He can stay.

You may remember my friend, the WTF owl, from my previous post:

His reactions are basically my reactions to this episode until the end of it, really.

I mean, I miss the Doctor, too, but it’s obvious that the new guy’s sickly and he needs your help. I mean… Jackie gets it:

I get that holy shit scary aliens, but whining about how the Doctor would never abandon everyone to their fate (which? Not even his choice! He’s passed out, not taking a lovely afternoon nap) is Not Helping.

Not that I wasn’t frustrated that the Doctor was unconscious for most of the episode, ‘cause I had the same question Jackie had about how deeply the changes went and I was getting no answers.

So here’s rundown of my emotions:

By the way, did I mention that I love Mickey Smith? I love that he’s still comfortable with Rose and is glad to see her, and I wish that a visit from Rose didn’t mean a disruption in normality and that he could just let it be Christmas with his friend, but I just love how he handles everything when it all goes south.

He offers Rose unquestioning support, and stays upbeat even when he’s clearly dismayed that Rose’s solution to the situation is running away and hiding (not that I’m judging her… I would’ve been in the TARDIS as soon as them sumbitches were on the screen).

Oh, and Harriet Jones, Prime Minister! My god, woman, I think I love you almost as much as I love Jackie Tyler.

I don’t agree with all her actions in this one, but I do love how calm and forceful she was throughout the entire crisis. And the bit with learning everyone’s name because she remembers never asking the aide’s name in Aliens of London/World War Three… I just. I can’t. It’s a tiny acknowledgement to the Doctor—he was the one that asked, after all, and it obviously stayed with her—and I wish all things in the world were as precious.

And for all my annoyance with her this episode, I like the part where Rose tries to stand up to the Sycorax:

… I also enjoy that “bitch, you sure about this?” look Mickey has in the background.

Rose still has a long way to go, though—for all her courage in that instant, she was pretty much forced into it. Remember, her first instinct was to hide. And there is that little tremor in her voice, which pretty much makes it impossible for the Sycorax to take her seriously. Oh, god, I was so scared they would kill her when she was done. I love you for trying, Rose!

I honestly had no idea what to expect. As I mentioned before, I hadn’t seen the Children in Need special before this, so I didn’t know this man. I was still sort of smarting at the loss of Christopher Eccleston, and I didn’t know if I could trust this… this… English professor? A sorta sexy English professor, but still… Okay, a lot sexy. He is pretty, okay?!

But then he started talking, and I… well, I fell in love.

I still missed Chris, but I could get behind this Tennant fellow. He was fun. He was funny. He was rude and not ginger. And he challenged a fucking alien to a fucking swordfight!

I love swordfights more than most things. Behold: 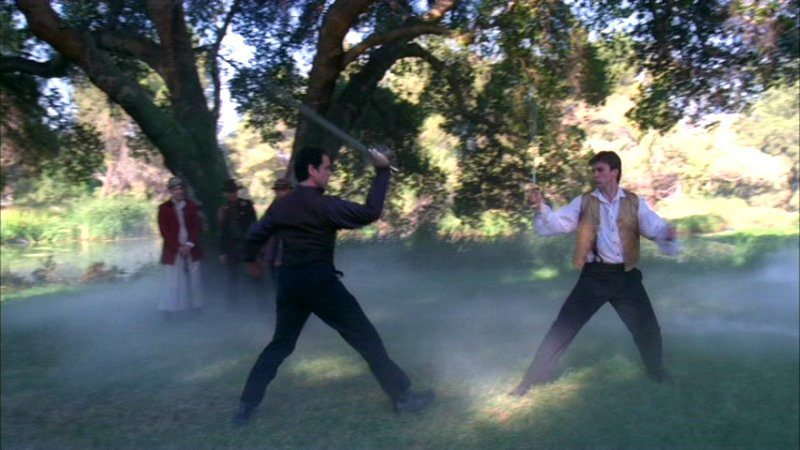 I just love ‘em! AND! And there’s a Hitchhiker’s reference! I just—look, it’s like someone looked into my brain and pressed all the “make V love this guy” buttons.

And best of all, he’s absolutely the Doctor… oh, not the same, of course, but similar. He has these hints of coldness and fury that remind me of Nine.

And speaking of, I’ve got to the bit that I have to address.

Let’s be clear—I do not agree with Harriet Jones’ actions at all. It was murder, and no amount of her asserting that it was defense will make me change my mind. Shooting on a retreating party is indefensible.

You don’t get to make that decision, Doctor, the people do. Worse, it seems to support Harriet’s taunt that the Doctor is just another alien threat, and this makes me feel all sorts of bad. Anyway, since I don’t wanna feel bad, I’d just like to give you a fully-dressed Doctor (yum):

Oh! Before I close this endless post, I just wanted to add one thing: It’s come to my attention that people give Davies a lot of flak for having Christmas Specials that aren’t very Christmas-y. To those people I say

As if there’s not enough sappy Christmas crap clogging up TV already… Sheesh.

Okey dokey, next time we meet, it’ll be New Earth!